For those who want a PS Vita, the wait is over soon. Sony’s PS Vita will launch in Europe, Australia and USA on February 22, 2012.

Luckily, I’ve been able to test the PS Vita on Sony’s roadshow here in Norway. 15 minutes of gameplay. Not a lot to judge from, but I give it a try.

The first thing that hits me, is how good the PS Vita screen looks. It’s a 5-inch OLED-screen with a resolution of  960 x 544. That’s four times the resolution of a PSP. In other words, the screen looks amazing.

, which you can use if you choose too.

I’ve always belived that the touch pad on the back of PS Vita was rough, that you could feel the the small triangles, circles, crosses and squares. But I was wrong. You can’t even feel where the touch pad starts or ends.

There is no big difference between the size or weight of the PS Vita and PSP, they are roughly the same.

I was able to test Uncharted: Golden Abyss, Wipeout 2048 and ModNation Racers: Road Trip. Around 5 minutes of gameplay of each, not an in-depth test. But the games looked nice on the screen and played well. What I didn’t liked was the loading time. It felt like ages for a track to load in both Wipeout and ModNation. I didn’t clock it, but my guess it was about 30-60 seconds. [Someone that can confirm that timeframe?] Uncharted was already running when I started to play, so I don’t know about the loadtime for that game.

I don’t like that that Sony introduce yet another memorycard for the PS Vita.Why couldn’t they go for a normal SD or Memory Stick?

There wasn’t time to test other function of the PS Vita, so I don’t know about them. But I liked what I got the chance to test and play with.

PS Vita looks like a good handheld, but I will probably wait to buy one until the price comes down and there are must-have-games.

You can check out Amazon.com

and Play-Asia.com for PS Vita consoles and games. 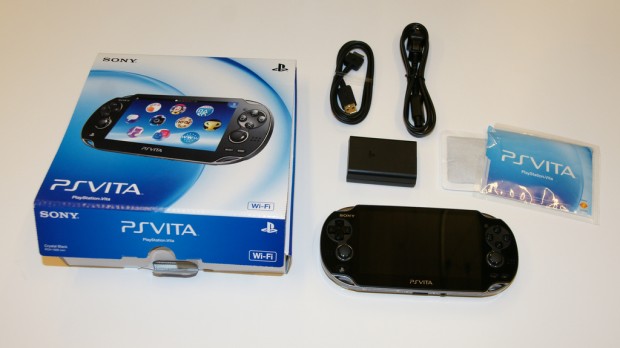