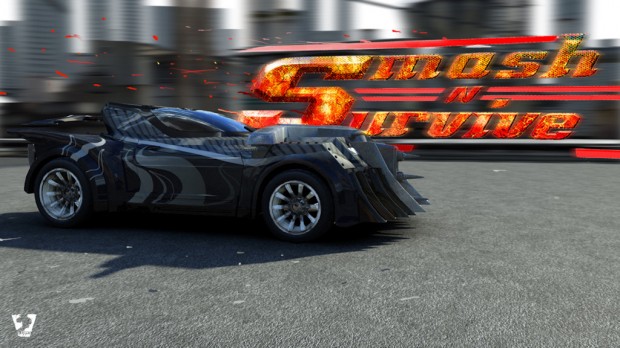 This is not a racing game, it’s more like destruction derby; smash, crash and collect.

You get a total of 30 customisable cars to play with wich you unlock during the game. On the 10 available tracks in the game you get missions to survive for a set amount of time, collect pickups scattered around the tracks or drive through check point before the time limit ends.

The cars can be customized, if a bit limited. It doesn’t impact the performance of the car, only the look. So in the end, I end up finding a car that have good speed and controll.

There is also a multiplayer mode in the game. It’s split screen only. So you have to play it physicaly with you buddyr side by side on the couch. It would be real nice with an online mode here, but race and destroy a friend is fun too.

The graphics feels a bit basic. Particles, likes flames, seems a bit flat and I’ve notices that when the car burns in front, the graphics clips. Where it should have been flames, you see an empty square. It woudn’t hurt to use some bright colours (may be not Nintendo bright), most of the game feels very dark. Also, the ‘music’ in the menus drives me crazy. It’s a 10 second riff played over and over again.

Smash ‘N’ Survive is probably not my game. It’s not fun enough for my taste. Even with the lack of online multiplayer, you will have fun playing against  your mate. The game is available on Playstation Network (Sony Entertainment Network) £9.99/€12.99. I’ll give a 5 out of 10.