It’s Red against Blue, cube against cube. You have to defend yourself. Sounds easy and simple, but it’s a bit harder than that.

Cubemen is a tower defense game. You have eight different soldiers at your disposal, but not all at once. They will unlock during the gameplay on the levels which you can buy with your blocks.

You deploy your soldiers by tapping on the the squares on the gameboard. If it’s not a good place, tap again to move to another place. They will shoot, flame and destroy your opponent.

Defense. The heart of Cubemen, defend you castle from the other team. You have to survive a number of attack waves.

There is 35 defense levels in the game. You will probably play well in the first Easy levels. But you will soon need more tries to win a level. Your strategic skills will be challenged.

There are six different variants in this mode:

Skirmish. This is intensive one vs. one action against a AI or human player. There are 25 levels to play through. While your troops can be placed on every square in Defense-mode, you are limited to where they can be placed in this mode. So you have to give it a bit more thought.

Mayhem. Multiplayer mode with up to 6 players, crossplatform (limited to 4 on the iPad). You can play all against all, or play as team against teams. If chaos is your thing, than this is your mode.

Don’t be fooled bye the simple graphics. Even though everything is blocky, it doesn’t affect the gameplay. It’s kind of cool. I find it easy to zoom in/out on the gameboards, and to navigate my troops.

The first levels are  relatively easy. But the later, you have (at least I did) to play more than once to win. It’s a nice progress. There are leaderboards which keep tracks of your score and you also are awarded with medals and archivements. This is, for me, a way to keep coming back to get it all [better scores].

Cubemen is probably not for the average player, but if you like a bit of strategy, you should try it out.

Review copy by 3 Sprockets, the gamecreators. 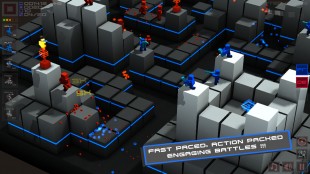 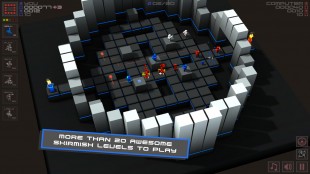 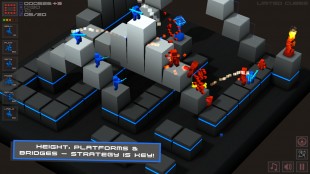