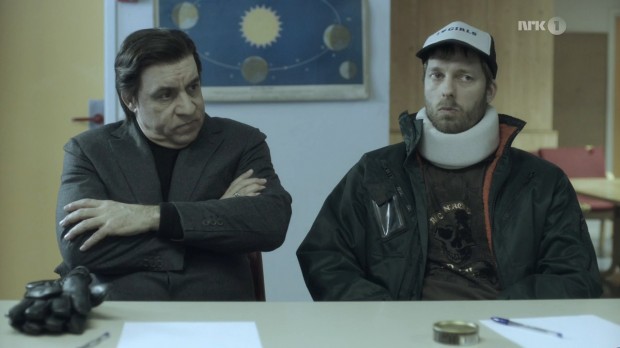 Steven Van Zandt is back. This time in Lilyhammer, an exclusive original series on Netflix.

Lilyhammer premiered on NRK1 (Norwegian Broadcasting Corporation) in January and will be available for Netflix subscribers in USA, Latin America and Canada on February 6, 2012.

Frank “The Fixer” Tagliano (Steven Van Zandt) was a mobster in New York before he testified against his old boss. As a result of the trial, he joined FBI’s witness protection program and was relocated to Lillehammer, Norway.

He chose Lillehammer because he had fond memories watching the Winter Olympics in 1994.

Giovanni Henriksen, which is his Norwegian covername, goes from beeing a gangster in New York to an unemployed immigrant in Norway. He have to learn Norwegian (or at least try to) and adapt to the Norwegian culture. That’s not an easy task. He have to join a six month program called New Chances.

Henriksen still got the mobster temperament and solves disagreements the gangster way of doing things.

Lilyhammer was set on hold for a couple of weeks before it aired on television in Norway, because of product placements which is prohibited on the Norwegian national broadcasting company NRK.

The reviews in Norwegian papers have been mixed, but the viewers love the show. The first episode got 998 000 viewers, while it increased to 1 024 000 in the second episode. That’s 57% of all people wathing TV at that time. Great ratings for a show during the mid-week.

I love Lilyhammer. It’s a great comedy show. As a Norwegian, I think the Norwegians in the show are a bit stereotypical. But that may be how Americans look at us Norwegians, or what?

There is a good mix of comedy and drama in the show. There was a lot going on in the first episode. The second episode followed up nicely.

It’s great to see Steven Van Zandt – aka Little Steven – play the role as Frank Tagliano/Giovanni Henriksen. Van Zandt is known from from The Sopranos and as a member of Bruce Springsteen’s E Street Band. The Norwegian actors play well too with their bad-norwegianized-english. Not all Norwegians talk like that, but it’s amplified to make it a more comedy element.

I can highly recommand Lilyhammer. If you stream it on Netflix, please make a comment on what you think of the show.

Made some small updates.